Original Photo for the Puzzle 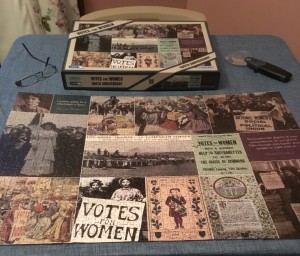 I love putting together puzzles. This is a great form of meditation and a great way to really put some thought into the person that is being revealed as you put the pieces together. While working on this particular puzzle above, I couldn’t get the song “Sister Suffragette” out of my head from Mary Poppins. That is because this puzzle is from the UK and made by Gibson, so these images are British Suffragettes. I also began to think of the statements shown in this puzzle and the context in which they were made back in that time period. For example, “I rather be a rebel than a slave,” stated by Emmeline Pankhurst.  Some people take offense to this now because they aren’t capable of taking in the the deeper meaning and the context. Obviously, around the time of the Civil War, a woman would not want to be a slave. Even today, with all the Human Trafficking that exists world wide, I would expect a woman to continue to make this statement if they were in a country that can be considered vulnerable to exporting women for prostitution. It meant that these women were fighting back against their “oppressors” which in that time meant men: husbands and fathers; politicians, who wouldn’t allow them to speak out. These people who wouldn’t recognize the need for women to have rights. Women felt that they were slaves to these men. Anyone who is being oppressed feels like a slave to the oppressor. History is not something to be ashamed of but to learn from and respect the lessons. Likewise, to think about how it could be applied in today’s society.

The other point of interest in this puzzle is the Derby Tragedy, which you can see in the middle of the poster. This actually shows the woman under the horse, rather you can see her hat that she was wearing and understand that this is what you are looking at. This is Emily Davison who martyred herself by running out in front of the King’s horse. To imagine that a woman felt so strongly about suffrage that she would give up her life for the cause. I doubt very many women would do such a thing today. I can’t imagine having this amount of passion myself even. You generally see people blaming rather than doing. Women weren’t blaming during suffrage. They were pointing out the importance of women having rights. They were educating other women and encouraging them to have a voice. This was a life changing moment in history. If they had merely went to lecture halls and focused on blaming their husbands and fathers, no one would have listened as this was too threatening to someone. It would be nice to see women taking this approach today, they might get more accomplished than they do. 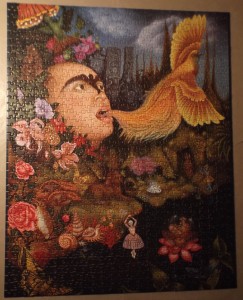 Frida Kahlo. This puzzle was created by Tino Rodgriquez for Pomegranate puzzles. I have several books about Frida, including one that shows a collection of her paintings. She is someone I admire because of the amount of pain she lived with during her life and her persistence to accomplish her dreams. While she did not have success with everything she wanted (and who does), she kept trying. Her paintings to me show a woman journaling her life story. Most people today do this by writing in a book. She took it a step forward, when journaling was not a popular self-awareness exercise. She gave us her inner feelings, the pain she suffered, the trials she faced, her political beliefs, all through her art work. Now, she is honored in Mexico almost as if she were a Saint  (you will often see “Our Lady of Guadalupe” in the same places). When you go along streets in various villages it is hard to not find a shop or a restaurant that does not pay homage to this courageous woman. Even immigrants to America will do so in their restaurants and stores.

Original photo used for the puzzle.

This puzzle by Master Pieces is of Eleanor of Aquitaine (1122/24-1201). She was the Queen Consort to France and England and the Duchess of Aquitaine. Katherine Hepburn portrayed her in the movie “The Lion in the Winter.” I saw the movie which seemed to focus more on her sons then herself. I have not read her biography yet so I don’t really know a lot to say about her. It is on my list of women to learn about. The image itself, as you see here, was quite magnificent to behold as I was putting this puzzle together. She seemed more of a Goddess rather than an actual live human being. This photo is reminiscent of Artemis who was generally seen with hounds by her side as she was a Huntress. Unfortunately, I didn’t take a photo of the puzzle, when I finished it,  so I am showing the image used for the puzzle. The colors were equally rich but I seem to recall a lot of glitter used on this image which I don’t find very amusing.

Original photo used for the puzzle.

I think it would be wonderful if we could see more puzzles created that depict Women’s History. I find that I have to work hard to look for them online. There are a lot of Goddess type puzzles. I finished one puzzle that was from a Tennis Club in Rhode Island (circa 1920’s). I only picked it up prior to a winter storm. I was at Wal-mart to get an online purchase and thought I might as well see what they had in the toy department. Much to my surprise, there was actually one thing there dedicated to women. I actually thought it was a suffragette puzzle (due to one woman in the left corner having the red sash on, which caught my eye). Though it is interesting that she is featured there and dressed differently than the other ladies in the picture. Perhaps she was returning from a meeting and planned to change into her tennis clothes at the club. By the way she is dressed, that would mean that this puzzle is not exactly 1920 as this was when suffrage was ratified.

At this point, I haven’t found one single puzzle dedicated to Ohio Women’s History. Unfortunately, I am not a painter but I do have many ideas for puzzles that could be created in a way that would delight the avid puzzle collector. When I work on a puzzle, I like to see a variety of colors and images and yet not too busy that it is overdoing it. You don’t want one that is all sky or ground or too much of one thing (for example a photograph). It is more exciting to see characters in action, as they would have been, with much detail. While I am working I feel almost like an artist, creating the scene that was chopped up for me. Building homes, train stations, plants, buildings, figures, it is exciting to try and put together a mess of pieces.

If you have a daughter that enjoys puzzles, introduce her to a few of these ladies depicted here or that you are able to find online. It will help introduce her to someone new that she wasn’t aware of. There are too many modern women online who are not exactly great role models. Reaching back into our past, in a more elegant time with very intelligent and fashionable role models – there are stories begging to be heard.

P.S. I am going to add some other Women’s History puzzles here as I find them. MasterPieces has a puzzle out of Norman Rockwell’s version of Rosie the Riverter. Eurographics has a puzzle with the actual poster that more people are familiar with today, from the artist Howard Miller.

Devotionals on A COURSE IN MIRACLES, A COURSE OF LOVE, THE WAY OF MASTERY, CHOOSE ONLY LOVE, and MIRARI . . .with Celia Hales

The Art of Blogging
History... the interesting bits!
Everyone Has a Story