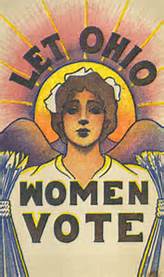 When I went to Ohio’s Statehood Day in February, I learned that they were putting together a bill for an Ohio Women’s Suffrage Centennial Commission. The good news is that it was passed on April 11th and is now awaiting Governor DeWine’s signature. This bill was sponsored by both a Republican (Stephanie Kunze – Hilliard) and a Democrat (Sandra Williams – Cleveland), which is a good thing in and of itself. I say this because it is nice to bring back some balance in politics which is how the journey for women’s suffrage began. Women from all different backgrounds came together in support of this cause. Unfortunately, there was a lot of drama between these women which caused the groups to split up into different factions as well. This would result in our suffrage taking much longer (approximately 70 years) before being ratified in 1920. Now, we have had 100 years of being able to vote in the elections and create an impact on who will serve in office.

The established date is 1848, at Seneca Falls, New York, for when women’s suffrage “began.” However, in order for them to get to New York and have this convention, there were many more years of going door to door and speaking to women locally. Women met in their homes or other local establishments that might allow them to hold a public meeting. Women’s suffrage meetings were going on all over the United States and the United Kingdom prior to Seneca Falls.

The main suffrage group established, in the United States, was (NAWSA) National American Women’s Suffrage Association. NAWSA became the League of Women Voter’s after women gained the right to vote in 1920. Alice Paul had created the National Women’s Party. Victoria Woodhull had formed the Equal Rights Party, as her short lived party when she ran for president in 1872.She also spoke to the House Judiciary Committee, a year prior to argue that women already had the right to vote (the Constitution did not say women could not). This was trumped by a lot of drama within the women’s suffrage factions that did not want Ms. Woodhull to go down in history for bringing us the right to vote. She had a lot of controversy surrounding her. One of the issues of concern was outing an affair, in her newspaper, of a highly revered minister; who was the brother of one of the top women in NAWSA.

President Woodrow Wilson is the leader who finally gave in, under duress from his wife and signed this bill once it was approved in the House and Senate. He was no more in favor of suffrage than President Lincoln originally was of ending slavery. In the end, they were swayed by a majority of their constituents and realizing it was the popular thing to do.

Thusly, a century later, our state is forming a commission to hold events and raise awareness about the importance and historical significance of the ratification of the 19th Amendment. Stay tuned to learn more!