Genealogy is a weird word to spell and I have to look it up every single time! Our language is weird period and I have heard it is one of the most difficult to learn. But, learning to speak French is even more bizarre to me, especially when you look at how they say their numbers past 40. C’est la vie! As we embark upon the Christmas holidays and, for me, four years into running this blog post, I felt it would be important to address genealogy and its importance.

Christmas is one of the top holidays celebrated around the world, next to the Day of 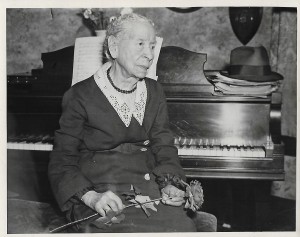 Mary E. Chase-Vail, she died the year this was taken so it was probably the last photo of her.

the Dead (which Americans call Halloween and don’t celebrate in the original style). While Christmas is a Christian holiday traditionally, many non-denominational people celebrate as well. It is just so much fun. It is a sacred family tradition one way or another and now, as families are splitting up and moving all over the place and mixing with various races, cultures and classes; the family tree has turned into a hybrid and has come a long way from where it began.

This is why it is important now to do a DNA and collect the family data so that your descendants will have some idea of what their roots are. Christmas is when Ancestry.com slashes the costs in half and you can get your DNA kit for a lower price while the season lasts. Christmas is when you often have a ton of people together and can ask the questions, write the names on the back of the photos and start scanning them in the computer and attaching them to your tree.

I use Family Search – it is free. I use Ancestry.com because I started there and have most of my data on there (before I learned about the former). There are lots of other databases but I think these two can be used together. Both for research though I don’t believe it is possible to take something from one and send to the other. Nonetheless, it is a tool to begin your work. 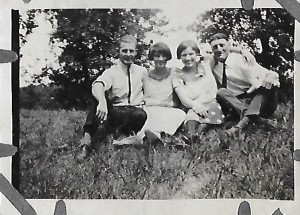 A secret still buried with the last guy who is next to my Grandma.

Genealogy is a lot of fun because you begin to understand YOUR whole picture. You see what your ancestors looked like; demographics or photos, financial aspects, jobs, etc…one way or another you can get a story. I have actually written stories about each of the people on my tree that I knew well. I want their memories to remain alive so that others will have a sense of who they were (from my perspective naturally). When I go to a gravesite and see an ancestor, I feel their spirit reaching out and sense the connection (say the name out loud and open yourself up to their presence). I imagine what the funeral might have looked like. 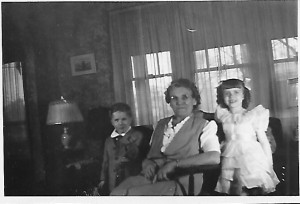 My Great Grandmother with my mother and uncle.

It is important to also do a psychological profile if you can (for mental health family trees) and a medical profile (which you can gather from your DNA report). With a psychological profile, you want to write down what the person’s diagnosis was or you think it was (make a note of whether or not they were diagnosed or this is your belief). Write down what they did for a living. This is important as it can give clues to why they might have had the mental health issues that they did. For example: veteran – PTSD or TBI possibly, coal miner – lung disease or cancer but this might have also led to mental health issues. Write down things such as whether or not they were divorced or had multiple marriages. Collect and write any pertinent information that might be relevant – even if it seems strange. After you have gathered as much as you can about various members of your family, you will begin to see a pattern. On my paternal side of the family there are about five generations of single mothers which is highly significant when you look at depression or personality disorders (as a possibility). It then says something about their children’s mental health issues.

By day I am a psychotherapist and I often support people (especially adoptive clients) into doing their DNA. Often people report they are scared. They feel that they are opening a can of worms – which they will be. Their stories however, provide answers and give closure. This helps them to build empathy. One person found long lost relatives and saw what they (the client) looked like. One person found they were very healthy which pleased them to no end. Sometimes they are shocked – a presentation that I went to of young people doing their genealogy – a boy learned that his grandfather was not blood related. That is sad but then he found out who he really was at the same time. History doesn’t need to cause you to stop loving someone. History opens up a window to show you a whole new world of knowledge that you can do with as you choose. Choose wisely though as these are your ancestors.

My maternal grandfather’s mother was divorced when she died. Her own grandchildren had no idea of this because they had never met her. This didn’t bother me as much as it did them because I had no attachment to it. In fact, it was just one more secret to add to the list we already had and helped me to understand my psychological picture on a much broader scale. I am not surprised about anything anymore.

The fun thing I learned is that I am related to Daniel Boone through his brother Charles and then it stopped with his niece because as a woman, her name ends. I used to watch this show as a kid and absolutely loved Fess Parker (the actor who played him). I even stayed at his (Fess Parker’s) hotel in Santa Barbara once. There are these intricate moments that are symbolic and add to the richness of who you are. 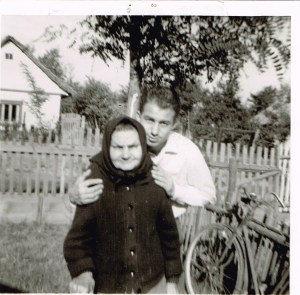 My stepfather (who adopted me at 9) next to his mother in Hungary.

As a word of caution in our Politically Correct world of ancestry destroyers, be proud of who you are. It doesn’t matter that your ancestors were slave holders or Nazis, because this does not define you now. Unless you personally are involved in human trafficking or anti-semitic actions in this day in age, you are not bad because they did something bad. Would you blame yourself if you were related to Attila the Hun? What if you were related to Pontius Pilot? Some people find that type of history exciting but it is no different. You were not there, you did not make those actions occur.

Sarah Winchester (in San Jose, The Winchester Mystery House), spent the final years of her life plagued with nightmares about her (husband’s) families gun legacy, who’s fortune she inherited. She was a little closer to this knowledge but she still was not to blame. Her family was not to blame either for an invention that people used for good and bad reasons. Many people fed their families hunting with a Winchester Rifle. Unfortunately, her unconscious mind only focused on those who perished in battles. It is not confusing to me though because when she began to have these dreams, she had left the east coast for the west. This was after her child and husband died. She was grief stricken and a lonely woman in the end. She became obsessed with a compulsion to remodel her home, based on the dreams she had. In reality, she had construction workers around her house 24/7, so she was never by herself. She was a philanthropist in the community and well known and loved by locals then. Her mental health is often the butt of jokes but I felt that the woman who lived there was very sane. Being a woman who lives alone, I can empathize and resonate with what her life might have been like. Being a therapist, I do understand racing thoughts and how some people, when vulnerable, and without a professional to speak with can allow their minds to overpower them. 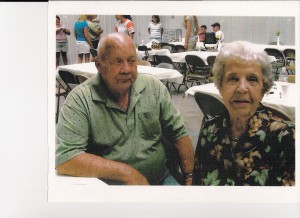 My birth paternal grandmother and step-grandfather. Lots of secrets with the Dunigan side of the family.

There is always a story. There is a path to understanding these stories if we are open to researching this. History was about choices based on the society that the person lived in. Today is about choices based on our environment now which will be judged one day when our descendants look back at us – I guarantee you. You may think you live a great life but they may think you are a fool – based on whatever society is like then. Live your life consciously and in a way that makes sense to you, as long as you bring no harm to others (intentionally). Take that DNA test and begin your adventure today. You will be richer for having done so no matter what you find.

1 thought on “Genealogy for Christmas”

~{LOVE IS THE ANSWER|HIDDEN IN PLAIN SIGHT}~

Devotionals on Writings Received from the Celestial: A COURSE IN MIRACLES, A COURSE OF LOVE, THE WAY OF MASTERY, CHOOSE ONLY LOVE, and THE WAY OF THE MARYS . . .with Celia Hales