Sojourner Truth was born Isabella “Belle” Baumfree sometime in 1797 in Swartekill, NY (died 11/26/1883 at 86). She was an abolitionist, an author and a human rights activist. She escaped slavery in 1826 with her infant daughter. She was the first black woman to get her son back in court two years later. Ms. Truth helped bring black troops to the Union for the Civil War and she also helped freed blacks to receive land grants. In the latter she was unsuccessful. She also narrated several pieces that have been published, her talk in Akron was not want of them. Today there are quite a number of memorials in her name around the country.

To say she was a suffragist is a little misleading. She stood alone and was not involved in a women’s organization. Her talk “Ain’t I a Woman,” was a title coined by suffragist Frances Dana Barker Gage, when she wrote, what she “remembered,” twelve years after the fact and published in the “History of Women Suffrage.” Ms. Truth had used the phrase Ain’t I a Woman, four times in the speech. Nowhere in the remembered talk noted suffrage for women. At that time, Sojourner (a name she took for herself after feeling a calling from God) and emancipated slave, was concerned about slavery. She was talking about equal rights for women but at that time, her concern would have been about freedom not about voting. How could she have imagined voting without first being a freed woman (or man)?

The Emancipation Proclamation was signed by President Abraham Lincoln, 20 years prior to her death and one year later it was passed by Congress. Thus, her focus was on freedom not suffrage in particular. She got up to speak in front of the Ohio Women’s Right’s Convention, on May 29th 1851, when they were there to specifically discuss suffrage. She requested to speak and this talk was allowed by the president of the convention. There is speculation as to whether or not the audience wanted her to speak because the suffragists were afraid that abolition of slavery would take away from their platform and would turn the public against them even more. On this day, there were known abolitionists in the audience, but there were other men and women as well.

After this talk, she did many other talks on the abolition of slavery in and around Ohio and other states. In 1853 (a Mob Convention), 1867 (American Equal Rights Association), and 1871(Second Annual Convention of the American Women Suffrage Association) she would be there addressing women’s rights. By the last two talks, the emancipation of slavery had occurred. Suffrage did not occur until 1919 and then ratified by 1920.

Below is the edited version of Frances Dana Barker Gage’s account of the speech “Ain’t I a Woman.” Ms. Truth was illiterate. She had worked with the abolitionist Marius Robinson when he had written her speech for the Anti-Slavery Bugle on June 21, 1851. However, this version is not as elaborate as Ms. Gage’s account. Ms. Truth is not known to have helped Ms. Gage with the script. Thus said, Ms. Gage added a southern slave dialect to the speech even though Ms. Truth was not from the south and spoke Dutch as a first language; having been born into a family of Dutch slaveholders. It makes sense for that time, though, because this is a voice readers would expect to hear from a freed slave. In 2020, this would be the same as if it was written in Ebonics even though the person was not born in the inner city and did not speak this dialect. What is written below will be in regular English, keeping old English words in (as best as possible). What is written outside of quotes is Ms. Gage’s commentary as to what was happening on that day, as she spoke this. Also, Ms. Gage noted that she said thirteen children but this has been changed to five here because Ms. Truth never mentioned more than five. Perhaps twelve years later, Ms. Gage was embellishing or just made up a number.

Aint I a Woman

“Well, children, where there is so much racket there must be something out of kilter. I think that betwixt the niggers of the South and the women at the North, all talking about rights, the white men will be in a fix pretty soon. But what’s all this here [you are] talking about?

“That man over there says, that women need to be helped into carriages, and lifted over ditches, and to have the best place everywhere. Nobody ever helps me into carriages, or over mud-puddles, or gives me any best place!” And raising herself to her full height, and her voice to a pitch like rolling thunder, she asked. “And ain’t I a woman? Look at me! Look at my arm!” And she bared her right arm to the shoulder, showing her tremendous muscular power. “I have ploughed, and planted, and gathered into barns, and no man could head me! And ain’t I a woman? I could work as much and eat as much as a man—when I could get it—and bear the lash as well! And ain’t, I a woman? I have borne five children, and seen them, almost all, sold off to slavery, and when I cried out with my mother’s grief, none but Jesus heard me! And ain’t I a woman?

“Then they talk about this thing in the head; what’s this they call it?” (“Intellect,” whispered someone near.) “That’s it, honey. What’s that got to do with women’s rights or nigger’s rights? If my cup won’t hold but a pint, and yourn holds a quart, wouldn’t ye be mean not to let me have my little half-measure full?” And she pointed her significant finger, and sent a keen glance at the minister who had made the argument. The cheering was long and loud.

“Then that little man in black there, he says women can’t have as much rights as men, because Christ wasn’t a woman! Where did your Christ come from?” Rolling thunder couldn’t have stilled that crowd, as did those deep, wonderful tones, as she stood there with outstretched arms and eyes of fire. Raising her voice still louder, she repeated, “Where did your Christ come from? From God and a woman! Man had nothing to do with Him.” Oh, what a rebuke that was to that little man.

Turning again to another objector, she took up the defense of Mother Eve. I cannot follow her through it all. It was pointed, and witty, and solemn; eliciting at almost every sentence deafening applause; and she ended by asserting: “If the first woman God ever made was strong enough to turn the world upside down all alone, these women together (and she glanced her eye over the platform) ought to be able to turn it back, and get it right side up again! And now they are asking to do it, the men better let them.” Long-continued cheering greeted this. “‘Obliged to ye for hearing me, and now ole Sojourner hasn’t got anything more to say.” 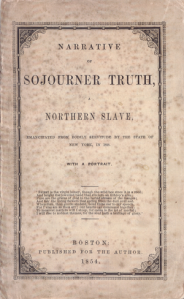 One of her published narratives.