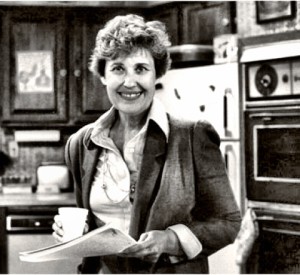 I remember reading Erma’s writings in Good Housekeeping, because I read anything my mom had on the bookshelf or lying around on the coffee table. She was writing for housewives which I was far from becoming but I still found it funny. I could imagine those things happening to women because I did a lot of housework, cooking and taking care of younger brothers myself. I wasn’t much into reading newspapers but I did follow her on occasion when she would appear on television from time to time or there would be an interview with her. Recently I thought about her again, though I can’t recall where I had read her name. It is so difficult to find books written exclusively about Ohio Women but I knew there would be one about her. And so I read, “A Life in Humor,” by Susan Edwards 1997.

If you ever wanted to understand the struggles of being a writer, than this is the book for you. While celebrities, big and small, seemed to have easy lives’ to a young woman like myself hers was certainly not one of them. Losing her father at a very young age of nine and having to live with her mother and grandparents. She might have been a “famous” tap dancer had she not been so keen on being a writer. She wouldn’t have been a writer either had she been the type to give up easily; practically failing out of college her first time out. Instead, she chose another college which appeared to be the right fit for her both academically and matrimonially. It was at the University of Dayton that she began her career at a newspaper office and met the man who would spend the next 47 years with her.

After a struggle to become pregnant and the stress of suburban housewifery, begging to look like them; she decided to adopt after two miscarriages. Then as fate would have it, no sooner had the little girl been brought into their lives, she successfully carried a child to term and then another. In the meantime she and Phil Donahue, a neighbor from across the street, began to have burgeoning careers.

Erma’s career was a struggle, partly because she was a woman and because she was dedicated to being a mother. Yet no matter what choices she made, the artist was a natural and eventually she would become a syndicated columnist writing three articles/week that would be seen around the country. This led to magazine articles such as the one I saw in Good Housekeeping.

She was approached by Doubleday to create a book which was a collection of her articles and the entry into published book writer began. Though Doubleday was not so keen to take her up on her fiction ideas, a salesperson there by the name of Aaron Priest was a great fan and saw the potential. It was through him that she began her career as an author. Before she died, she would pen eleven books and all from a typewriter. One book was made into a movie which starred Carol Burnett but unfortunately did not do well at the box office. Below is a four minute segment of this movie and I also began watching the movie on YouTube and easily saw what happened. It had funny lines (very good actors) but in between a lot of work had to be done to carry the long scenes. While it perfectly shows a typical family of the late 70’s early 80’s it is like a reality show without a producer creating conflict between the characters. Just a typical long day in the life of… It would be something I might download and watch on a Sunday; when it is raining outside.

Her first movie debut didn’t do to well but suddenly she was approached to write a play and then a TV show. The TV Show was called “Maggie” but this didn’t make it past the eight week pilot season. There is a trailer for this on YouTube but no dialogue, just credits and scenes of the opening bit for the show. It had a lot of actors who later became much larger on screen, but this wasn’t their big debut.

I found it ironic that fate put her into the hands of a kids camp for cancer survivors, in Arizona where she and her husband had moved after his retirement. The woman who ran this camp wanted her to bring some humor to the children. It wouldn’t be too much longer before she herself was claimed as a cancer survivor by having a mastectomy. Shortly after surviving this a kidney disease which she had inherited from her father began to show its ugly head. After waiting a few years to get a transplant, she died from complications that occurred after the surgery in a San Francisco hospital.

I found a quote from her that I especially loved, which was noted in this biography by Susan Edwards.

I get people who tell me they want to write, too, but that they have this house, and they have these kids, and they have that car pool. Listen, the priority has to be this, right at the top. People can’t put their dreams in a little box and take them out and play with them from time to time. These are people who are afraid to put it on the line.

If you are a writer, there is a writer’s conference annually called the Erma Bombeck Writer’s Workshop at the University of Dayton.

The most important thing to take from this book was the level of modesty shown by this great lady. While she had a bug in her that just wouldn’t stop her from writing, she never let it go to her head. As I once learned years ago at a writer’s workshop in California, and I don’t know that I have the quote word for word, “Your only as good as the last book you have written.” She was an Ohio woman who never took one day for granted.

~{LOVE IS THE ANSWER|HIDDEN IN PLAIN SIGHT}~

Devotionals on Writings Received from the Celestial: A COURSE IN MIRACLES, A COURSE OF LOVE, THE WAY OF MASTERY, CHOOSE ONLY LOVE, and THE WAY OF THE MARYS . . .with Celia Hales