Women’s History is More than Just Suffragists. Are you intrigued to find out more about the women in your state and what they have accomplished? Then this is a great place for you to be. I began writing on here as a hobby in September 2015 and this has now segued into a project that I wish to turn into a business. Ohio Women’s History Project will help to educate and raise awareness to other people in our state about another part of history that they may not have heard about. How did I come to create this website?

Once upon a time, as a young reader, women’s history books were the genre I became captivated by. As I grew up, I began to write for myself and found that my roots crept into the pages. I studied my own ancestry and learned of my Appalachian, German, Irish/Scotch, English and possibly Native American history.  Returning to my homeland several years ago, after living abroad, I found a different place than what I grew up in.

I have created this blog/website as an homage to the women who ARE/WERE Transformed. For women who might have come from humble beginnings and were in a time when it wasn’t so easy to be heard and make things happen. I want young women and older women to realize that you can have the life you want now. That you can make a difference in your life and the lives of those around you. I chose Ohio Women because this is where I came from. There are other women’s history books out there that talk about women from around the world. This is a segment of our population that I would like to share. I want you to be transformed by these women, who had a lot more obstacles to confront then we have now and yet they persevered, were determined and became social change agents.

Looking for great products with this logo? Click on this image to go to our store.

**Are you a woman from Ohio and passionate about writing? I welcome volunteer contributors to bring more interesting stories to the blog. These are famous women, infamous women, unsung heroines who have made some contribution to the progress of women, to our state, or exceptional stories of strong and courageous women that no one will know about. They can be from another state or country originally but spent time in Ohio and as a result became extraordinary women. If so, write to me at ladyjatbay @ gmail.com

TWEET #ohiowomen and talk about a woman who has influenced your life.

The photo above comes from the Hungarian Church on Woodrow Avenue in Columbus, Ohio. This was taken from a glass enclosed case that they were afraid to open so unfortunately, it has a glare. The photo is from the 20’s and is the Lorántffy, Zsuzsanna Ladies Aid Society. This women’s group was designed to keep the culture alive in America through cooking, sewing, embroidery, and other activities. They predated the  Women’s Guild which would come later and the Lorántffy, Zsuzsanna group fell apart before the 80’s as the women had passed and there weren’t enough newer immigrants to take on this task. I grew up with some of the women in this group and from visiting their homes I can tell you it was a wonderful aroma to partake in! 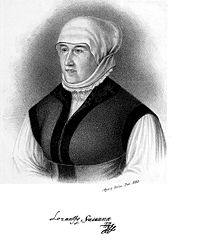