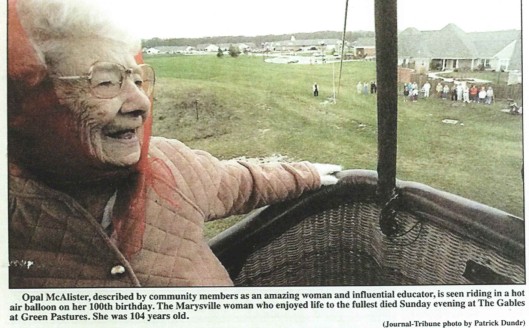 Opal lived to be 104 years old. She was not a famous woman though after coming to learn of her history, after purchasing my home, I was intrigued by her story. She was a first woman to accomplish quite a few things in her life and so it is important to note this unsung hero (as I hope to do with other women), here on this blog.

I knew that she was the first woman to live in my home but I did not realize, until I received the Auditor’s assessment list (Franklin County) that she purchased this home as a single woman in 1930 at the age of 26! On March 3, 1930, Opal L. Dunn is listed as purchasing this home for the first time from the Minerva Realty Company. At that time, Minerva Park was not an incorporated area and had only been known as an amusement park from 1895-1902. However, in 1928, the Minerva Realty Company purchased the land and put up a few homes. Not until 1940 would the area be incorporated and officially recognized as its own community. By this time, Opal and her husband Daniel D. McAlister (married later in 1930) had moved on and another couple had moved in (1939). She and her husband lived here for 9 years, though for some reason the deed only lists Opal L. McAlister changing her name on November 9, 1936.

While researching her information I was able to find an obituary from 2009 in the Marysville Journal-Tribune. They never mentioned her early time here in Minerva Park but they mentioned so many other wonderful tributes. She was “described as an amazing woman and an influential educator,” in the article. For 52 years she worked as a teacher and principal. During her time as a teacher, she taught at Watkins Public School from 1923-26 (around Obetz Ohio) and was head coach of the Varsity Boys Basketball team. From 1927 to 1942 she began teaching in a town called Flint, which was a village that housed the Westerville Railroad station but is actually in Worthington now. I looked this up and it appears that the abandoned school is still standing on Flint Road and Park Street.

During World War II Opal had entered the Army voluntarily in 1942 at the age of 38 in Des Moines, Iowa. She was part of the Women’s Auxiliary Army Corps and earned the rank of Second Lieutenant at graduation whereby she was given the task of training women for work overseas. At the end of her career in 1946 she held the rank of Captain. In 2007 she was asked to give a speech during the dedication of the Union County Veteran’s Monument, on the courthouse lawn. She gave this presentation from memory.

After her term of service with the military, she moved back to Ohio and served as teacher at Ostrander School a town inside of Delaware County. By 1964 she had risen to the rank of first female principle of Ostrander Elementary School. She took a temporary early retirement in 1967 as her husband was very ill, returning to school after his death (1969) but not until 1970. She then remained a teacher until 1975.

She was also the president of the Delaware County Teacher’s Association for 20 years. Later she would hold a position in the Retired Teacher’s Association for the same county for 15 more years. The Journal-Tribune states that “She was honored for her teaching in Lessons of the Century: A Teaching Gem by Robert C. Johnston in Education Week magazine in September 1990.”

As you can see by the photo above, Opal celebrated her centennial by flying in a hot air balloon. When I saw this photo, it really said a lot about the former owner and first woman of many great things. I wish I had known her and would love to see some historical photos of my home and what it looked like when she actually lived here. In the meantime, I cherish owning a home that was originally purchased by a single woman, in a time when women just did not do these kinds of things.